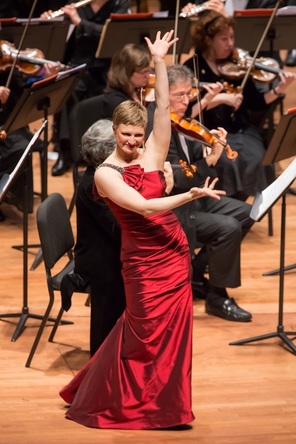 Lincoln Center Debut, 2013
American and Italian soprano, Juliet Petrus, is recognized for her effortless coloratura and is steadily making her mark as a versatile and captivating performer in the world of recital, concert and opera.

The 2019-2020 Season marks an exciting return to the operatic stage for Juliet, introducing Aricie in Hippolyte et Aricie by Rameau (Ensemble OrQuesta, Grimeborn Festival 2019, Arcola Theatre, London) and Blondchen in Die Entführung aus dem Serail (Bühne Baden, Baden bei Wien, Austria) into her repertoire. She also revisits the Queen of the Night at the Hamburger Kammeroper. Ms Petrus recently performed the role of Gilda in concert in Shanghai, China, at the M Glam Performance space, as well as Carmina Burana with the Alabama Symphony and Maestro Carlos Izcaray. Juliet was recently invited to sing at Pritzker Pavilion at Millennium Park in Chicago as part of the Great Lakes Music Festival 'Friend Lasts Forever' concert, celebrating the connection between Chinese and American music. Juliet made her second appearance at Alice Tully Hall, Lincoln Center, as part of the 2018 Asian Cultural Symphony Fall concert. In 2018, she began a six-year solo tour of China, in addition to her numerous appearances on Chinese TV. Later this season, she will debut the role of Rosina in Il Barbiere di Siviglia with M Glam Shanghai.

In recent seasons, she made her debut with the Bach Society of St. Louis singing the Soprano I solos in Mozart’s C-minor Mass, after having previously performed the Soprano II solos with the International Chamber Artists in Chicago.

Juliet frequently performs as the soprano soloist for Carmina Burana, most recently making her premiere to great acclaim with the St. Louis Symphony,Colorado Symphony, South Bend Symphony, and in Suzhou, China. She also recently made her solo debut with the Kalamazoo Symphony as the soloist in the Fauré Requiem. She has sung with Austin Lyric Opera in Texas (Queen of the Night, The Magic Flute), Glimmerglass Opera (Eurydice, Orpheus in the Underworld, and La Musica, L’Orfeo; Young American Artist 2007 and 2008), Michigan Opera Theatre (Mrs. Nordstrom, A Little Night Music, Giannetta, L’elisir d’amore), Union Avenue Opera, St. Louis (Galatea, Acis and Galatea). Other recent performances include appearances with the Southwest Michigan Symphony Orchestra, South Bend Symphony, Skokie Valley Symphony Orchestra, Music of the Baroque, New Millennium Orchestra, and Fulcrum Point New Music in Chicago.

Ms. Petrus is in high demand in the United States and China as the leading Western interpreter of contemporary Chinese vocal music. She spent the summers of 2011 and 2012 with the acclaimed iSing Beijing program (now iSing International) working with famed Metropolitan-Opera bass, Hao Jiang Tian, and making her National Center for the Performing Arts debut in Beijing. This also led to her Lincoln Center and Carnegie Hall debuts in 2013, as well as a tour of the US and Paris, France. In 2014, she made her Shanghai solo recital debut with a concert of Chinese repertoire with pianist, Fugen Wei. She also recently returned as a guest artist with iSing International making her concert debuts in Hangzhou and Suzhou. She recently made her Chicago Symphony Orchestra Hall debut, and in summer of 2015, she made her solo debut with the Shanghai Symphony, under the baton of Yu Long. In fall of 2015, she released her first solo CD, A Great Distance: A Collection of Chinese and American Art Song, with pianist, Lydia Qiu.

Juliet is a founding member of the Collaborative Arts Institute of Chicago, devoted to the education and performance of art song. She served as a teaching artist for both Lyric Opera of Chicago and City Colleges of Chicago from 2008-2016. She is proud of the work that she did helping to pilot Music for the Mind (now Bridging Memory Through Music™) with the Institute for Therapy through the Arts in Evanston, IL. Music for the Mind engaged early-stage Alzheimer's and dementia patients with live musical performance and conversation as therapy, leading not only to an improved quality of life, but notable cognitive improvement by participants. Ms. Petrus is also an accomplished violist, pianist and former musical-theater choreographer. She currently resides in London, England with her husband and their young son.