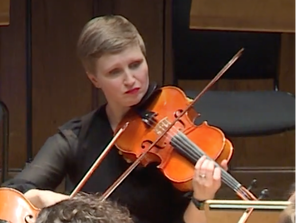 Juliet began playing the viola at age 10, and made her professional debut as an orchestral player at age 14. She sat principal for a number of orchestras in the Detroit-metro area in her native Michigan, including the Detroit Symphony Civic Orchestra under Maestro Leslie Dunner. During this time, she also began playing in string quartets. In 1996 and 1997, Juliet served as the violist in two different string quartets which took the title of 'Top Chamber Ensemble in the State of Michigan,'  as well as earning an invitation to the Fischoff Chamber Music Competition.  After being the recipient of numerous awards and scholarships to such prestigious festivals such as the Interlochen Arts Festival, Juliet pursued a double major in voice and viola performance at the University of Michigan. During her time at the University of Michigan, she continued to play in string quartets and in regional Michigan and Midwestern orchestras.
​
She is pleased to pass along her passion and knowledge for the viola and chamber music with another generation of player. Her instruction looks closely at proper posture, finger and bow articulation, sight-reading, musical terminology, style, phrasing, and musicality. Lessons are available online, as well as in person at her West London studio. Contact Juliet for more information.